Plan for Robertson or Snow job in June? 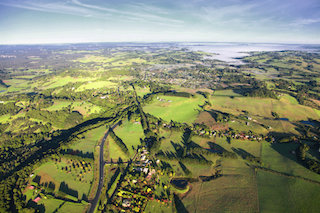 This was a strange event. From the invitation it looks like the launch of a plan for Robertson Village. Maybe I went to the wrong event.

To be fair a list of names of sections of a plan was flashed up on a screen. And some attendees seemed to have a copy of an action plan. I know not where they got them.

There were several attractive and heart warming elements of the event. The students performed wonderfully singing, reciting and playing instruments as well as offering a welcome to country. My review of the event is intended in no way as a criticism of the children. And had I been a parent I would have been immensely proud as many obviously were.

Several speakers made the point about the fact that the students are the ones who will live with what we leave to them and that education is the major asset we can give these precious people.

That said, the major piece on the day was an advertisement and fervourino for some kind of Robertson information amenity. None of this made much sense to me, and since we were not permitted to ask questions I post mine here.

·      Why was a time when many working people of Robertson could not attend chosen for the launch of a plan, which would affect them?
·      Who appointed the committee to develop the Information facility?
·      How did the information facility gain priority among the other needs of the village?
·      What will be the benefit to the community as a whole? (There seems to be an unfounded presumption that the village is a commercial entity of some kind).
·      If there is need of a building why not use the CTC which is built and is supposedly for the Robertson community?
·      From the presentation some kind of architectural feature seems proposed. Granted the fact that most tourists and visitors now use smart phone and car applications, and will do even more so in the future, why build anything and not put the investment into an updated application as to what Robertson is and what people can do here?
·      When will there be a dedicated presentation of the plan for Robertson with the opportunity to discuss and dialogue about guidelines and plans, which will affect our lives?
·      Many people are understandably cynical about ‘community consultation’ and see it as a box Councils need to tick rather than an enactment of deliberative democracy.  How would this event have benefited them rather than reinforce their cynicism?
·      Many residents would consider responding to requests for input into a plan as a fruitless exercise. And since it is the dialogic process which best practice worldwide recommends why does the council not use best practice?
·      Many would see the major challenge for the future of Robertson as the inclusion of and retaining of older residents in their community a major priority. Instead sending them away to some other place isolated from those they know and love means dying longer rather than living longer. Where are the plans for incorporating these kinds of dwellings into the housing mix of the village? How is the future plan managing this matter?

These questions arise for me as a Robertson person and as the designer, manager and facilitator of 55 Strategic and Corporate Future Plans and for which my company received an award from the Planning Association of Australia for excellence in community consultation processes.

I sent the above to the shire for a response  or correction before I put it up on line. Nicholas O’Connor Group Manager Corporate and Community replied:
The launch of the Plan will signify the handing over of he Plan from Council (who facilitated its development) to the community for ownership and future management.
Overall the OVOF project in Robertson village has been a success for local village action planning and the partnership formed between the community organisations.
Working Group – Seed Funding Project – Community Information Board
The working group has been formed to plan and allocate the seed funding. The group is made up of representatives from the community with the design and construction of a Community Information Board being planned.
This project will incorporate public art and provide information on the history of the village, local attractions, and walking tracks which will help to encourage tourists to explore the area. The project fits in some way into all of the objectives listed in the Plan and the overall community vision.
The Robertson Shed has taken the lead role in the management of the project and endorsement to release the seed funding to this organisation to commence this project has been given.
The budget for the project exceeds the seed funding allocated and grant applications and other plans to raise funds are being worked on by the group.

As you can see the reply goes nowhere near responding to the questions. It quotes from a planning document.  This is common practice these days. Questions or challenges are responded to with slabs of quotations from Strategic and Corporate documents without dealing with the matter at hand. You make up your own mind.