Today November 17th has been a day for protest about the need for serious action about climate change. There have been protest rallies all over the world and Australia. Jayne and I attended the event in Bowral in the Southern Highlands of New South Wales.

The weather was drizzly and not a day for a picnic as the conveners had suggested. Instead umbrellas and colourful clothes and rain wear.
On arrival I was surprised to find a marine biologist scientists was explaining how heat is contained in the sea and works its action from there. There were folk musicians and an entertainer ready to conduct the gig. My idea of these things is that we meet and protest with the aim of bringing about action via attention and numbers present so that there is policy change by government and then initiatives to combat and manage climate change. I was astonished by the passivity of the event as planned and by the preaching to the converted by local gurus. I grabbed a mike and said that some of us were going to march around town and if people wanted to come they were more than welcome.
This must have struck a cord. Almost immediately we had a procession to get in front of. A couple of seasoned protesters got up the front, waved placards and generated a chant.
"Wadda we want? Clean energy! Wender we want it? Now Why do we want it? For our children."
Off we went, down the street across a pedestrian crossing with a lot of people so that our presence was noticed. We turned a few heads and had some positive responses as well as stares and reproving looks. But we did raise the issue and demonstrated that some are committed to change and to serious action about our precious and vulnerable environment.
Concluding, the earth and climate scientists are a source of information, time and again they have demonstrated they do not know how to influence policy, communicate with large and small groups, realize that facts do not change behaviour, understand psychological resistances to change and how to manage resistances. It would be good if they were humble enough to consult other scientists who understand these matters. However when there are serious matters involved there will be egos and fear and desperation involved, rivalry between idealistic groups and somehow 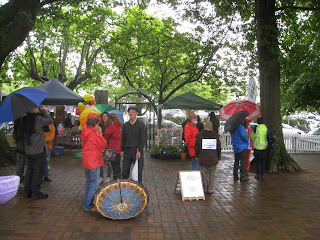 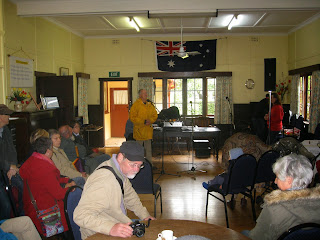 we will muddle through. A good day with lots to learn from.