In 1986 I joined the Zen Group of Western Australia. This meant meditating with the group as close to weekly as possible, making a Zen retreat or Sesshin almost yearly and the daily practice of Zazen (meditation).
This has been my spiritual practice my Way or Tau since then. My first teacher was the respected and remarkable Robert Aitken Roshi who came from the Diamond Sangha in Honolulu to assist Zen students and incipient teachers in Australia.
John Tarrant Roshi from California also returned to his native Australia to lead Sesshins here on several occasions which I attended.
Ross Bolleter, musician, composer and music teacher was authorized to teach in 1992 by John Tarrant, and received transmission from Robert Aitken and John Tarrant in 1997. He has taught extensively in Australia and New Zealand and has successors in both places.
When I moved to NSW in 2001 Ross was still my teacher and I had telephone Docksan (Interview with the teacher) fairly regularly.
This year I visited my teacher Ross in Perth and he recommended I contact the Sydney Zen Group and teacher Gillian Coote. 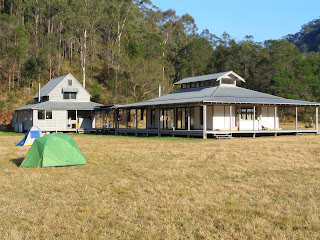 I visited and meditated with the Sydney group at their place in Annandale.
Then I enrolled for the spring Sesshin this month at their retreat center Gorrick's Run on the McDonald River out from  Wiseman's Ferry. The Sydney people led by architect Tony Coote built the meditation hall, teacher's residence, kitchen, dormitory toilets and shower block over thirty years.

On the opening evening I said that I was both excited by the opening world of Sesshin while also apprehensive of the pain and frustration which accompanies intensive growth work. And thus it panned out, though I felt held and supported by the members of the Sangha (group[) and the practices which structure the Sesshin day such as chanting, meal rituals, walking meditation and visiting the teacher. It is strange how so much which happens in silence has such effect.
I am grateful to the group of fellow students and  to Gillian Coote and Maggie Gluek for the strength and authenticity of their teaching and their cutting away of non essentials so that there was just one focus point.