The Lion my brother. 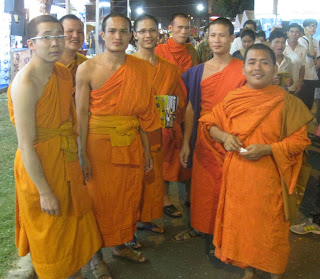 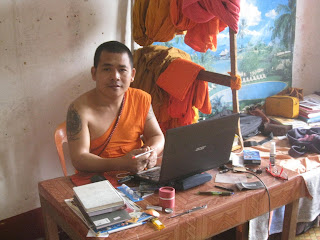 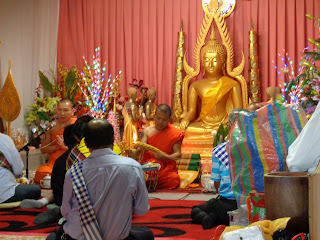 It was New Years' Eve in Chaing Mai. Before meeting up with my brother and  his daughters' family at their house I stopped at Wat Jet Yod, "the temple of the seven peaks" to meditate. It is an ancient place with Indian features and an authenticity which is encouraging.  Hours later I could not find the iPod I use to time my meditation. I must have left it in the temple. So next morning I headed back to find the precious object. Unusually, the place was locked solid. There was no one to be seen but somehow I was led to believe that it would be opened at about 10.00 am.
It was open but there was, not surprisingly no sign of the iPod. As you would know, these places do not have lost property offices. But I found my way to the house of the Abbott and asked as clearly as possible about the possibility of finding or someone else finding the iPod. No one in the house spoke English. I was redirected to the cell of Monk Johnny in another part of the campus.
We soon discovered that he did not speak English either, but was eager to help me. With drawings and the use of an English Thai dictionary we interrogated the problem. From that moment forward I realized how valuable it was to have lost that piece of gear. Nor had I any inkling of where this contact would lead.
The following day I went to the Travel Police who courteously assisted me to register my loss and eventually collected insurance and replaced the item, which is still in use today.
Johnny was fasciated that a ferang (foreigner) would have been meditating. I was fascinated to talk to a Theravada Buddhist about his meditation. Johnny's cell was like a half sized sauna with temperature to suit so our discussions needed a different venue. We chose the Vihara Stupa and mostly we meditated in silence. A bond develops between people who meditate together even if they never speak. But not being Asian and not having my Zen cushion, my zafu,  the Zen meditation cushion, and zabuton, the mat which goes under the cushion,  kneeling/sitting was more than unusually uncomfortable. We met several times for this exercise, and extended our contact into discussions of all kinds of things.
Gradually I learned more about Johnny's life. He had come from a country village in Laos and joined the monastery in a nearby town. Thence to Vientiane where he studied Buddhism and gained a general education. One day in Vientiane a senior monk asked a group of young monks, "Who wants to go to Thailand" several volunteered, I think it was five; all of whom except Johnny have disrobed. So Johnny landed at Wat Jet Yod and eventually gained residence there. The Abbott noticed him and gradually gave him more and more responsible tasks and assignments. One one occasion a casual visitor made a large cash offering to the monastery via Johnny who passed it directly to the Abbott who acknowledged his integrity in neither pocketing the cash nor charging "a fee" for the transaction, which would not have been culturally unusual. By the time I met him he as studying psychology at Wat Jet Yod University for monks, where coincidentally I was teaching English.  He also learned, Japanese, Pali and Chinese as well as becoming fluent in Thai.
So when there was to be a small retrospective ceremony for me to depart from the Jesuits  at the Jesuit Seven Fountains monastery I invited two guests, my blood brother Wallace and spiritual brother Johnny. This was the first encounter with Christianity for Johnny. David Townsend resident Jesuit conducted matters finely and afterwards the four of us walked around the grounds together. It was a significant landmark in my spiritual journey.
Johnny and I continued to meet to talk for his English conversation and to meditate at Wat Jet Yod. Then one day I found he had gone to Vientiane. So when I next went to Thailand, to Issan, to teach English I went across the Friendship Bridge to Vientiane to see Johnny at his monastery there in 2014. His conditions were spartan and he slept in a tent on a veranda. Vientiane was hot and airless. The monastery seemed to lack heart and the spiritual/emotional warmth of the  place was in inverse ratio to the climate. Johnny was there to spend sufficient time to get his Laotian passport. Finally he got it and his papers to go to of all places, Australia.
We have kept in contact via Facebook.  I have spent time in the last few days at the Watmai Buddhavongs Monastery at St Albans west of Melbourne where Johnny is a member of a community of three monks.  It is a gathering node for Thai and Laotian people in Victoria. Their hospitality has been wonderful. The New Year celebrations brought a large crowd of people who in turn brought traditional food and much  sticky rice. Very enjoyable. His teacher has now named him after the lion, he is Singha (you may know the title as a brand of beer) he is Venerable Singha Phuthirach teaching novices to meditate and teaching the community Buddhist ethics among other things. It is a delight for me that Singha  calls me his a brother.  I hope Australia will be good for him as I know he will be for Australia.
Posted by Michael D. Breen at 12:51 No comments: